Trip to the Old Gordon Cemetery

Trip to the Old Gordon Cemetery

We were able to make connections through the Cache Creek Conservancy with Jim B. who contacted the owner of the property where the old Gordon Cemetery is located and got permission to visit.  Not only did we visit the cemetery but we were shown the old dam site where the first irrigation network was set up on Cache Creek.  That’s another post.

The picture below is the monument set in place in 1948.  The cemetery has been preserved by the slab of concrete and pipe fence you can see in the background.  All the remaining headstones are lying on the concrete.  According to the landowner the county archives, which are accessible, had a map to the property and people would drive out and visit without permission.  He told us that that’s no longer happening because the map has been put away. 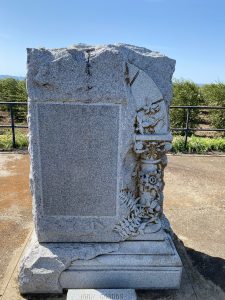 This is the plaque at the base of the monument.  The rectangular space that you see above on the monument is inscribed and very difficult to read.  The landowner said that other visitors had brought paper and pencil and had shaded over the inscription.  I tried to read it but the sunlight made it almost impossible to see.  There’s a lot on there. 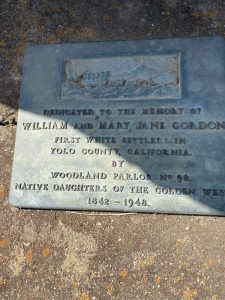 Here are some of the headstones. 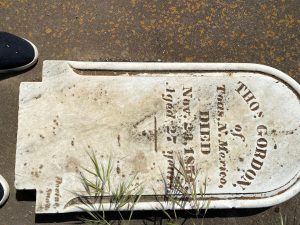 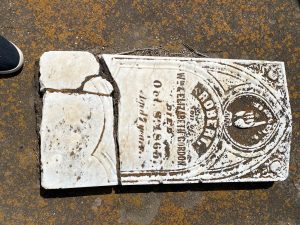 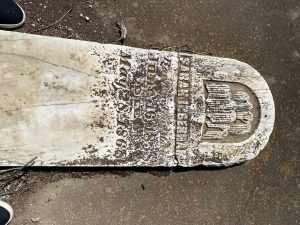 The story, as I understand, is that three trappers came to this part of Yolo County.  Their names were Wolfskill, Gordon, and Knight.  Wolfskill went down to Putah Creek, Gordon stayed here on Cache Creek, and Knight went to the area north of Woodland.  Gordon brought his family west in 1841.  They were given a land grant of about 6,000 acres on Cache Creed by the then Mexican governor of the area.  Gordon farmed the area for a number of years then moved to Lake County where he died in 1876.  The place on Cache Creek was called Rancho Quesesosi.

Lots more history here.  William Wolfskill was also given a grant and his brother John Wolfskill planted vines and trees along both sides Putah Creek.  John is recognized as the father of the horticultural industry in northern California.

I have always wondered where the name Putah came from.  According to the book I have the word is the Spanish approximation of the name of the Patwin tribe that lived in the area.

What a great day.